In the morning of December 24th 2013, Hue former capital’s monument conservation center held officially ceremony to welcome the visitor who is 2 millionth passenger coming into Vietnam in 2013.

The 2013 is the second year which monument conservation center welcome 2 millionth passenger coming to Vietnam. The amount of tourists visiting Hue former capital jumps over 2 million arrivals. The revenue from ticket booking also jumps over 2012. 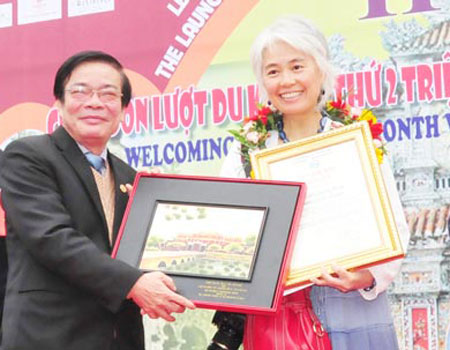 Mrs. Yoshimi is the 2 millionth passenger that coming in Vietnam in 2013. Therefore she also received 1 voucher which she can stay 2 nights for 2 persons from 5 star hotel La Residence Hotel & Spa in Hue; 1 free ticket tour to travel in center Vietnam in 4 days from Hue tourist company sponsor; 1 free ticket that she can visit all relics in Hue since 2014 and many gifts from Hue former capital’s monument conservation.

In this ceremony, there are many gifts to give Mr. Conlin Tapp (England nationality) and Mrs. Nguyen Thi Thu Thanh from Ho Chi Minh City. They are 2000100th passenger come into Vietnam.
According to Dr. Phan Thanh Hai’s state, director of monument conservation center, although Phu Bai international airport closed 6 month and effected natural disaster, the amount of tourists coming Hue is about 2.6 million arrivals, the revenue is about 126 billion VND. 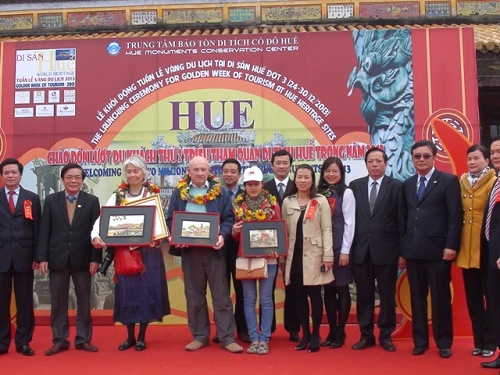 Many art activities also display on golden week such as: