This is the traditional festival of local people to worship the god of the My Long sea. Ministry of Culture, Sport and Tourism have just announced the list of National Intangible Cultural Heritages in 2013

In this list, there are 8 heritages certified and the festival to worship the My Long beach is also one of them. This is the 2nd heritage of Tra Vinh province is certified by Ministry of Culture, Sport and Tourist. In the April of 2013, Cham-rieng Cha pay art, a musical art of Khmer, was also certified as a National Intangible Cultural Heritage by Ministry of Culture, Sport and Tourist. 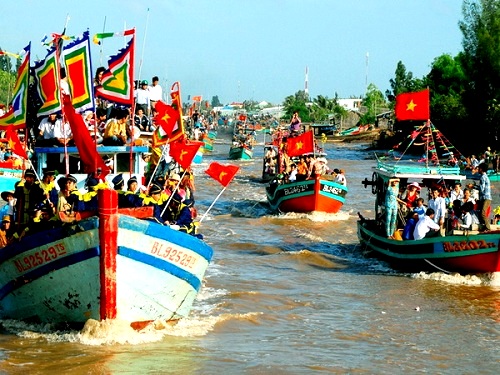 One of images of this festival

For fishmen’s point of view, the festival to worship My Long sea, also named Nghinh Ong festival, is celebrated from 10th to 12th Lunar May every year. The festival is celebrated to show the deep gratitude of fishers to the god of the sea for bringing them a rich and happy life.

Besides worship for timely rains and favorable weather, this festival is also an occasion to show respect to a whale which is called as Mr. Nam Hai. Many stories are told that when fishers met stormy in the sea, their ship which started to sink is helped by this whale, or some people are helped to escape from dangerous shark.

One of protocols to worship in this festival

Old fishers said that: In the past, there were many sharks at My Long beach, fishmen put out to sea by their ship, when the stormy came up, their ship usually sank and dangerous sharks got some unlucky people. After that, people usually start to celebrate for worship. At the beginning, they just worshiped near the beach, then they built temple to worship. 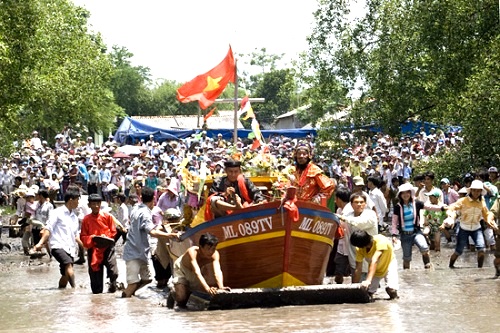 This festival attracts many local people and tourists

With traditional protocol, this festival becomes unique culture of local people and attracts many people to come and join this festival

This festival is upheld by the local people around 100 years. The scale of this festival is larger year by year with a lot of etiquette celebrated professionally with the traditional. They also organize some entertainment to meet the needs of local people and tourists. There are many travelers coming to Tra Vinh province to join this special festival every year.